It’s where the headwaters of the Spencer Creek emerge that this trail begins. The Spencer Creek watershed starts in Puslinch Township at the southern fringe of Wellington County. Here, pure clean water comes to the surface in springs flowing up out of the ground year round.  This is the beginning of the stream’s journey to Cootes Paradise and Lake Ontario. 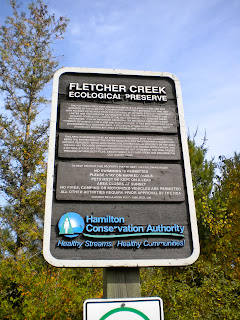 About the best place to witness the springs of the Galt Moraine and its cold-water creeks is in and around the Fletcher Creek Ecological Preserve, Hamilton Conservation Authority’s (HCA), most northern conservation area.

In this preserve we find many fascinating sides of the area’s natural history and the effects of man’s activities. Leading from the area’s entrance on Concession Rd 7 in Puslinch is a trail running east for almost 2 km or so, into what was once an old hard rock quarry. Following this trail allows us to witness many facets of this landscape. Some of these lands have been changed tremendously by man and other parts really have not been touched by our forefathers.

Not only is the natural history of this area fascinating but so is the story of how this conservation area came into being. It was in the late 1970’s that two long-time members of the Hamilton Naturalists’ Club, Ms. Marion Shivas and Dr. Bert McClaren came to the realization that parts of this property required saving and should be put into public ownership for the sake of future generations. Together they spearheaded the Club, in partnership with HCA, to purchase a 30 acre or so piece of land on the north side of the railroad tracks that bisects this conservation area. Shortly thereafter the Club came up with the funds to purchase another adjoining 30 acres and this lead to the establishment of the Puslinch Wetlands Conservation Area.  These acquisitions were the catalyst for HCA to acquire another 300 adjoining acres on the south side of the railroad tracks. Hence today’s Fletcher Creek Ecological Preserve came into being.
Near the centre of the 300 southern acres was an abandoned quarry that likely saw its start near the turn of the century. The quarry work left a deep pond and during the 1970’s and 80’s the area was known as a popular swimming hole and a place where the visitor’s and inhabitant’s behaviours might have been best described as quite liberal and free.

In the last decade the old quarry has been significantly changed by HCA into a shallow wetland and the limestone cliff into gravel hillsides that are quickly being re-vegetated by nature.

Starting on the trail heading east from the entrance we ramble through open areas where old fields seem to be stalled in their successionary travel of plants through time. Grasses, sedges, field wildflowers (Goldenrods and Asters), seem to have a hold on the area. Hawthorns and cedars are slowly trying to gain a foothold into these old pastures. To the north are cedar swamps and through them runs one of the cold-water creeks leading to the Spencer. Traveling further down the trail we find ourselves emerged in the dark cedar forest and on to a bridge that crosses the creek. Below us, Speckled Trout may be seen traveling from pool to pool in this brook. These cold-water loving fish thrive in this creek and range right up and into the springs found on the north sides of the tracks.  A prettier fish cannot be found in Ontario and to have a thriving population of Speckled Trout in this cold water stream speaks volumes about the pristine quality of the stream and the undisturbed environs that it meanders through.

The springs emerge at the south toe of the Galt Moraine, which we see as the massive hills of gravel between here and Guelph. Rainwater percolates down through the gravel hills of the moraine and its downward flow is stopped when the water meets the bedrock that underlies the moraine in this area. The slightly sloping bedrock directs the groundwater sideways to where it emerges in cool verdant springs.  Some of these springs can be 10 meters across and a meter deep.

The water flowing in these crystal clear springs is close to 10 degrees Celsius all year round no matter how cold or hot is outside. The waters flow from deep in the ground where the soil is about 10 degrees year round. This is great for the Speckled Trout and the other cold water loving fish and aquatic invertebrates that depend on cool water all year. It is a thrill for all to witness the silent water emerging from the ground as it roils the detritus and bits of marl in the bottom of the spring, constantly changing but always the same.
Leaving the cedar swamp we venture into old fields which are becoming home to native White Pines and the fields are dotted with mature Sugar Maples that stand like sentinels. Now we start to see the evidence of man’s heavy hand. All of a sudden old concrete foundations appear out of nowhere. The footings were once part of the buildings that housed the machinery involved in the hard rock quarry operation of days past.  One’s imagination can only help us in our questions of what these buildings originally looked like. What did it sound like here before when the rock was being tossed and crushed into gravel? The dust must have been flying. 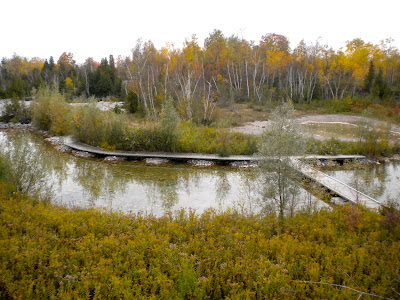 Behind these concrete structures the old quarry opens up in front of us. From a vantage point of over 10 meters up we can look below to see the vast area that was once occupied by the quarry. By today’s standards the quarry was small but at a time when horses and steam would have been the main drivers, this quarry was significant. The walls around the quarry, not long ago, were much steeper and there was a quite a deep body of water at the foot of the cliffs. Over the last decade HCA has worked in conjunction with McMasterUniversity and the University of Guelph to bring the area back into a more natural state. Paths around the old quarry have been developed and boardwalks take us over the water that flows from small springs. The springs keep parts of these shallow waters ice free all winter and a stream flows from the bed of the old quarry and it feeds vibrant wetlands. The flow of water here sometimes looks like a small stream and at times it fans out into a wider plain forming wet meadows.
Stay tuned for Part 2 of the story of Fletcher Creek Ecological Preserve, a Trail of Two Ravens.
Bruce Mackenzie
Manager of Customer Service & Operations
Hamilton Conservation Authority
How to get there:
The Fletcher Creek Ecological Preserve is located on the east side of Puslinch Concession Rd 7. Take Highway 6 North from Hamilton to the Gore Rd, about 3 km north of Freelton. Turn west on Gore Rd (  Concession 11 W.) and follow it for about 5 km and turn north on Concession  Rd.7 and the entrance is on the right very shortly after you turn.
Posted by Hamilton Conservation at 14:41

Email ThisBlogThis!Share to TwitterShare to FacebookShare to Pinterest
Location: Puslinch, ON, Canada